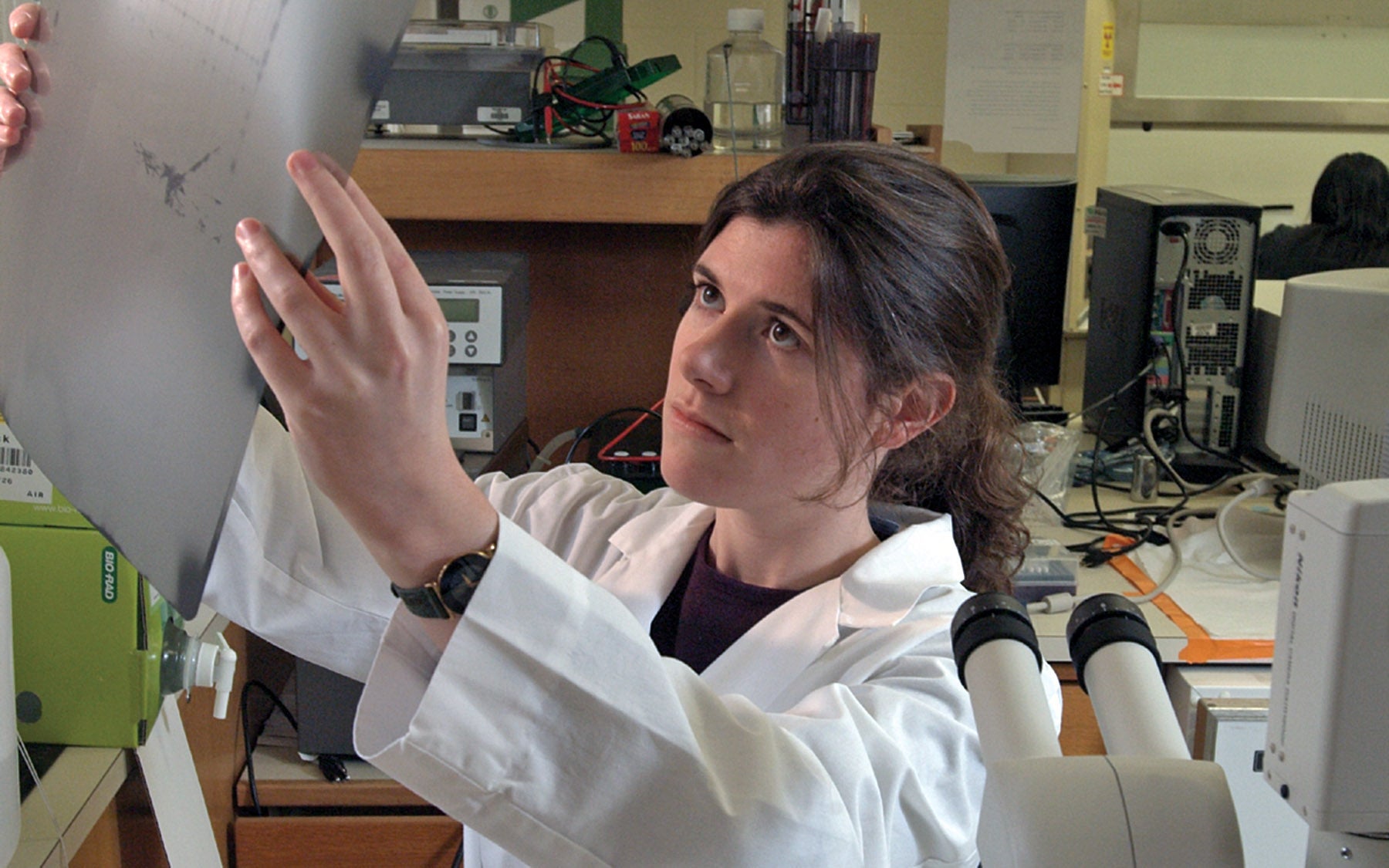 When you hear the term “contagious disease,” what tends to come to mind? Perhaps it’s images of red-faced, watery-eyed people coughing, sneezing and rasping around in a public space when they should be home, resting in bed. Or maybe it’s the unpleasant memories of a firsthand experience with a bout of whooping cough, chickenpox or streptococcal pharyngitis (better known as strep throat).

What you probably did not think of was cancer.

However, there are in fact three types of contagious cancers, spread by the transfer of living cancer cells between organisms, which are currently known to exist in nature. These cancers can be found in domestic dogs, soft-shell clams and Tasmanian devils—with additional unknown strains likely occurring in other species. And it’s become the mission of Watson School of Biological Science ‘07 alumna Dr. Elizabeth Murchison to uncover and understand both their molecular mechanisms and evolutionary histories.

“My focus is to investigate how these cancers became transmissible, and to understand the evolutionary processes that have driven their emergence and spread’” said Elizabeth who works as PI of the Transmissible Cancer Group at the University of Cambridge in the U.K.

Elizabeth’s group primarily studies the clonally transmissible cancers found in domestic dogs: canine transmissible venereal tumor (CTVT), and Tasmanian devils: Tasmanian devil facial tumor disease (DFTD). CTVT, a sexually transmissible cancer that manifests as external tumors on both male and female canine external genitalia, is found worldwide—most commonly in countries where a culture of allowing domestic dogs to roam freely exists. DFTD is spread by biting (devils are a mouthy bunch, frequently biting others in squabbles over mates and food) and causes tumors to appear on infected animals’ faces and/or inside their mouths.

Dog owners in developed countries like the U.S. and U.K. don’t have to worry much about CTVT, since it rarely occurs in those countries, said Elizabeth. She explained that CTVT is much more prevalent in less-developed nations, particularly those with free-roaming dogs. If contracted, dogs with CTVT can be treated with chemotherapy and in most cases can be completely cured. “However, this is not so with DFTD,” said Elizabeth. “It’s a very aggressive transmissible cancer with no treatment, and almost always causes death—it’s already caused a massive decline in the devil population in just a few decades.”

And for Elizabeth, a self-proclaimed animal lover who said she originally wanted to work as a veterinarian, the devastation of DFTD in particular hits close to home.

Raised in Tasmania, an island state of Australia, Elizabeth recalls cherishing the rare sighting of a “taz,” as they are commonly called. Tasmanian devils, fierce furry black nocturnal creatures with strong jaws and sharp teeth and carrying the title of world’s largest carnivorous marsupial, are more often heard than seen, said Elizabeth. “They make a piercing screaming sound at night. It’s quite a noise.”

Though elusive by nature, another reason devil sightings are so rare is that DFTD has caused the animal’s population to plummet precipitously since infections were first observed in 1996. By 2008, DFTD had killed half of Tasmania’s devil population. And the disease is still spreading rapidly today. “It could lead to the complete extinction of devils in the wild,” said Elizabeth, adding, “DFTD is a very important conservation problem, yet stopping or even just controlling it is a very difficult task.”

It was in 2002 as a Ph.D. candidate at Cold Spring Harbor Laboratory working in Dr. Greg Hannon’s lab when Elizabeth, a recent graduate of the University of Melbourne at the time, first heard about DFTD. She decided it was her duty to do something to “save the taz,” Elizabeth said, adding that she did not realize how special the Tasmanian devil was until she relocated from Australia to New York. Though her primary focus at WSBS was to study RNA interference, Elizabeth diligently worked on the side to understand the development and history of DFTD.

After completing her graduate studies at WSBS, Elizabeth returned to Australia to study the devils up close, collecting tumor tissue samples and recording notes about cancer incidence. This experience and her educational background in genetics, molecular biology and biochemistry led her to secure an Australian postdoctoral fellowship to conduct her DFTD research at Cambridge’s Sanger Institute and later to open her own lab at Cambridge, where she is currently studying DFTD and CTVT.

In her lab at Cambridge, Elizabeth and her research team use high-throughput DNA sequencing technologies to investigate the genetics, adaptation and evolution of the two diseases. By elucidating the cancers’ genetic characteristics and histories, the Transmissible Cancer Group hopes to assemble genomic data sets applicable for the diagnosis, evolution and treatment of DFTD and CTVT. The lab’s research is supported by the Wellcome Trust, Leverhulme Trust, Royal Society, National Science Foundation and Save the Tasmanian Devil Appeal.

Elizabeth said her research is rewarding from the perspective of helping tazzies and dogs but also very interesting from a scientific perspective. For instance, after determining that CTVT had first emerged approximately 11,000 years ago, Elizabeth and her team could extrapolate the phenotypic traits of the CTVT founder dog, from which the cancer originally arose and whose genome CTVT cells still carry. Using CTVT genomic data, they were able to literally draw a picture of the dog based on the genetic variation found in the DNA of the cancer samples. “That’s been quite fun,” she said, noting that, based on their evidence, she and her team believe that, of the breeds that are around today, the CTVT founder dog was most closely related to the Alaskan malamute.

According to Elizabeth, the study of contagious cancers has implications beyond saving the lives of dogs, soft-shell clams and Tasmanian devils.

“[CTVT and DFTD] tumors are very good models for understanding the evolution and growth of human cancers,” said Elizabeth. “I hope that this genetic approach will lead us to insights that will lead to vaccines or treatments for all types of cancers, in animals and people.”