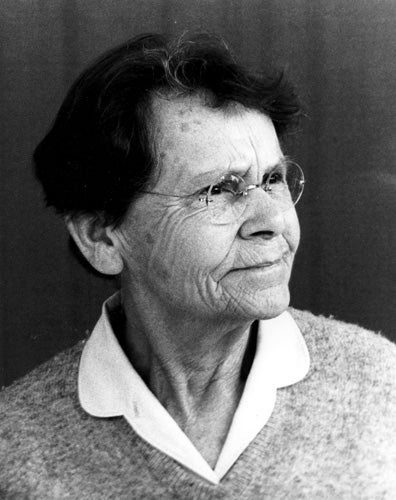 Barbara McClintock, America’s most distinguished cytogeneticist, was born in Hartford, Connecticut on June 16, 1902. She received her B.S. from Cornell University in 1923 and earned her M.A. in 1925 and her Ph.D. in 1927, also from Cornell. McClintock served as a graduate assistant in the Department of Botany from 1924-27 and in 1927, following completion of her graduate studies, was appointed Instructor, a post she held until 1931. McClintock was awarded a National Research Council Fellowship in 1931 and spent two years as a Fellow at the California Institute of Technology. In 1933 she received a Guggenheim Fellowship, which enabled her to spend a year abroad at Freiburg. She returned to the US in 1934 and joined the Department of Plant Breeding at Cornell. In 1936, McClintock accepted an Assistant Professorship in the Department of Botany at the University of Missouri, and in 1941, she joined the staff of the Carnegie Institution of Washington in Cold Spring Harbor, New York (now Cold Spring Harbor Laboratory).

McClintock’s studies and observations of mutation in kernels of maize (corn), led to her discovery of transposable genetic elements. Although the scientific community largely ignored her concepts, advances in molecular and microbial genetics ultimately proved her findings correct. She is now credited as the discoverer of transposable—or “jumping”—genes, a discovery which is at the very root of much of today’s research in genetic engineering.

Numerous foundations and societies have praised McClintock for her research and scholarship. Throughout her life, she received various awards, including the Achievement Award of the American Association of University Women (1947), the Award of Merit by the Botanical Society of America (1957), the Kimber Genetics Award from the National Academy of Sciences (1967), the National Medal of Science (1970), the Lewis S. Rosentiel Award for Distinguished Work in Basic Medical Research (1978), the Louis and Bert Freedman Foundation Award for Research in Biochemistry (1978), the Wolf Prize in Medicine (1981), Albert Lasker Basic Medical Research Award (1981), and the Lousia Gross Horwitz Prize (1982) for her outstanding research in the “evolution of genetic information and the control of its expression.” McClintock was awarded the Nobel Prize for Physiology or Medicine in 1983 “for her discovery of mobile genetic elements.”

1973 Cold Spring Harbor Laboratory honored McClintock by dedicating a building in her name. In 1980, at the University of Colorado, The Genetics Society of America saluted her “for her brilliance, originality, ingenuity and complete dedication to research.”

McClintock was awarded honorary doctoral degrees by fifteen universities. She was a member of the National Academy of Sciences and the American Philosophical Society, as well as several other professional organizations. She was elected Vice President of the Genetics Society of America in 1939 and President in 1945. Between 1963 and 1969, as Special Consultant to the Agricultural Science Program of The Rockefeller Foundation, she was instrumental in advancing the training of geneticists in several Latin American countries.

Even before her discovery of transposable elements in maize, Barbara McClintock was among the world’s most respected cytogeneticists. She worked as an assistant with Rollins Emerson (one of the two foremost maize geneticists in the country – the other being Louis Stadler), on a Rockefeller Foundation grant (1934-1936) for which she did her own work. Her colleagues at Cornell under Emerson included George Beadle and Marcus Rhoades. She may also have met Milislav Demerec, who received his Ph.D. under Emerson in 1923. Shortly after receiving her doctorate, McClintock began work with Harriet Creighton. Together they demonstrated that genetic crossing over was accompanied by physical crossing over of the chromosomes (the formation of chiasmata was made by Janssens in 1909). With this, McClintock and Creighton beat by a matter of weeks the German Drosophila geneticist Curt Stern, who made a similar finding in flies independently. McClintock grew interested in the responses of the genome to traumatic events. She formed an association with Lewis Stadler at the University of Missouri. Stadler had shown the mutagenic effects of X rays on corn (at about the same time as Hermann Muller did with fruit flies) and sent McClintock irradiated strains of maize. With these, McClintock identified ring chromosomes, which she soon realized were a special case of chromosomes broken by radiation; the broken ends sometimes fused to one another and formed a ring. This led McClintock to hypothesize the existence of a special structure at the chromosome tip, which she called the telomere, that would maintain chromosome stability.

Stadler brought McClintock to the University of Missouri in 1936, where she continued work on broken chromosomes. There she described the breakage-fusion-bridge (bfb) cycle, a repeating pattern of chromosome behavior that was sometimes triggered by an initial breakage. In the bfb cycle, broken chromosomes might fuse to the other member of the pair, forming a bridge that was then ripped apart at meiosis (or, in another form of the bfb cycle, at mitosis), thus beginning the cycle again.

For a variety of reasons, not least being McClintock’s rivalry with Missouri geneticist Mary Guthrie, a tenured position was not forthcoming at Missouri. McClintock spent the summer of 1941 at Cold Spring Harbor as the guest of summer investigator Marcus Rhoades. McClintock never left. Demerec, by now director of the CIW Department of Genetics, arranged a temporary, and then a full-time appointment for her.

At Cold Spring Harbor, McClintock discovered in some of her bfb strains some bizarre genetic behavior. Certain mutable genes appeared to be transferred from cell to cell during development of the corn kernel. As she later said, “one cell gained what the other cell lost.” Though her initial discovery was made in 1944, McClintock confirmed, controlled, and extended her observations for six years, publishing at last in 1950.

Her first public presentation of transposable elements was at the 1951 Cold Spring Harbor Symposium. McClintock expected recognition and acceptance, but instead was greeted with silence and derision. Almost certainly, much of this response resulted from the mutual admiration of McClintock and Richard Goldschmidt. The cantankerous Goldschmidt was a gadfly of genetics, known for denying the status quo. Since 1938 he had been arguing against the standard theory of the gene, promoting instead a holistic, chromosomal theory in which a gene’s position relative to other genes determined its function. Goldschmidt fought one of the main advocates of the gene theory, George Beadle. He saw in McClintock’s data new support for his theory; in return, McClintock saw that Goldschmidt’s concept of the chromosome as the basic unit of heredity was more consonant with her transposable “controlling elements” than was the standard Beadle and Tatum model of the gene. With McClintock making her allegiance to Goldschmidt so plain, it is little wonder many scientists denied or ignored her! In reality, scientists had immense respect for McClintock’s data; it was her conclusions they doubted.

The development of molecular techniques that allowed isolation of transposable elements, as well as their discovery in other organisms, including fruit flies and yeast, led to the eventual acceptance of transposable elements as a general and important phenomenon. Today, they are known to be widespread, occurring even in humans.

Beginning in the late 1950s, McClintock spent many seasons in South America and Mexico, studying the “evolution” of agricultural maize by Indians. This represented an early and exhaustive example of ethnobotany, and was work McClintock was quite proud of, though less known for.