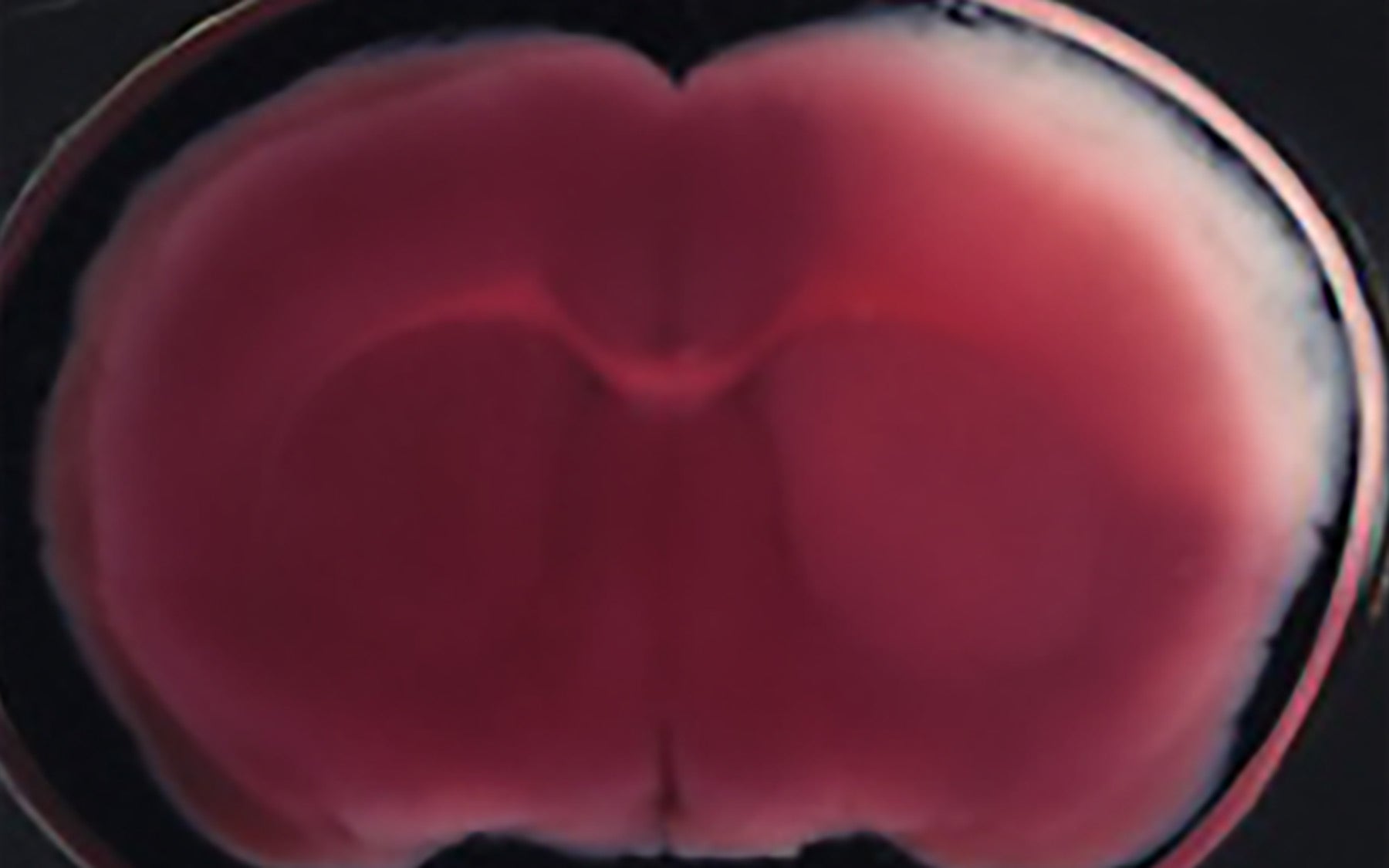 Staining of coronal brain slices from mice that have suffered stroke shows an injured area in the top right corner (white area).
email envelop icontwitter icon share buttonfacebook icon share buttonlinkedin icon share button
Cancer biologists know the PTEN gene as a powerful tumor suppressor and one that is among the most commonly deleted genes in human cancer. For more than a decade, CSHL’s Dr. Lloyd Trotman has studied the role of PTEN in cancer, developing many of the animal models that have delivered key insights into how its loss triggers tumor growth.

His relationship with PTEN took an entirely new direction recently, when his team at CSHL and collaborators led by Dr. Seong-Seng Tan at the Florey Neuroscience Institutes in Australia discovered a new role for the PTEN protein in the brain, one that could potentially be exploited in designing a therapy for stroke.

When a stroke cuts off blood supply to a brain region, the neurons in that region are in danger of perishing due to the resulting drop in the levels of oxygen and essential nutrients. Trotman and the other researchers have discovered how modulation of PTEN function, via a change in the protein’s cellular location within neurons, aids their survival in this situation.

Trotman’s collaborators were interested in understanding the genetics of stroke and finding genes that are important in repairing damage and boosting neuronal survival. While investigating genetic activity within the affected brain areas of mice that had undergone stroke, the team found two genes that seem to be regulated by ischemia—the loss in blood supply that causes stroke.

One of these genes is Ndfip1, which encodes a protein that facilitates protein transport—a process that moves proteins from one cellular compartment to another. The other gene encodes a protein called Nedd4, which modifies other proteins in a way that usually targets them for destruction.

“That’s when we came into the picture,” says Trotman. His team had previously found that Nedd4 interacts with PTEN within cells. This discovery was surprising because the interaction did not result in the destruction of PTEN, which is what usually happens to other proteins when they interact with Nedd4.

Teaming up, the two groups have now connected the dots. They’ve found that when stroke occurs, PTEN is transported into the cells’ nuclei in a process that appears to be dependent on the Ndfip1 protein. And because this relocation does not result in the destruction of PTEN, it returns to the cytoplasm when the neurons are no longer in danger.

Why is this temporary relocation important? When it resides in the cytoplasm of a healthy neuron, PTEN acts as a brake on a cellular pathway that promotes survival and proliferation—a mechanism that prevents the cell from turning cancerous.

“Getting PTEN out of the cytoplasm and into the nucleus after stroke is a great way to remove this brake and boost the pathway that’s going to keep the cell alive during trauma,” explains Trotman. The team’s finding that stroke-induced damage is more severe in mice that can’t move PTEN into the nucleus than in normal mice underscores the importance of getting this protein out of the way.

“Relocating it temporarily is a much better option than destroying it and getting rid of it permanently, which would make it much harder to reapply the brake when blood supply eventually gets restored,” Trotman says.

These results, recently published in the Journal of Cell Biology, have huge implications for stroke therapy. “Blocking PTEN systemically and over a long period of time can be dangerous because that might lead to cancer. But because stroke is an acute, short-lived event, a short-term removal of the PTEN brake in the brain via PTEN-inhibiting drugs might deliver beneficial results in stroke patients,” according to Trotman.

“We’ve always studied PTEN in the context of how its misregulation (often through mutations) can lead to cancer. This is the first time we’ve seen how PTEN trafficking is regulated by a natural mechanism—blood supply to tissues,” says Trotman.

His team is now investigating the possibility that this mechanism of PTEN transport into the nucleus might occur in tissues other than the brain in response to fluctuations in blood supply. As obstructions or limitations in blood supply are found in many types of cancer (for example, colon cancer), such a finding could have a big impact on our understanding of cancer progression.

Patricia Churchland, founder of the field of neurophilosophy, discusses research on the origins of human morality and social bonding.   Read more »

LIVE At the Lab with Patricia Churchland: Social Conscience

CSHL Assistant Professor Lucas Cheadle has been named a Next Generation Leader by the Allen Institute for Brain Science.   Read more »