Home / Banbury Center / Copper, cancer, and COVID-19: The story of an idea, a meeting, and a paper 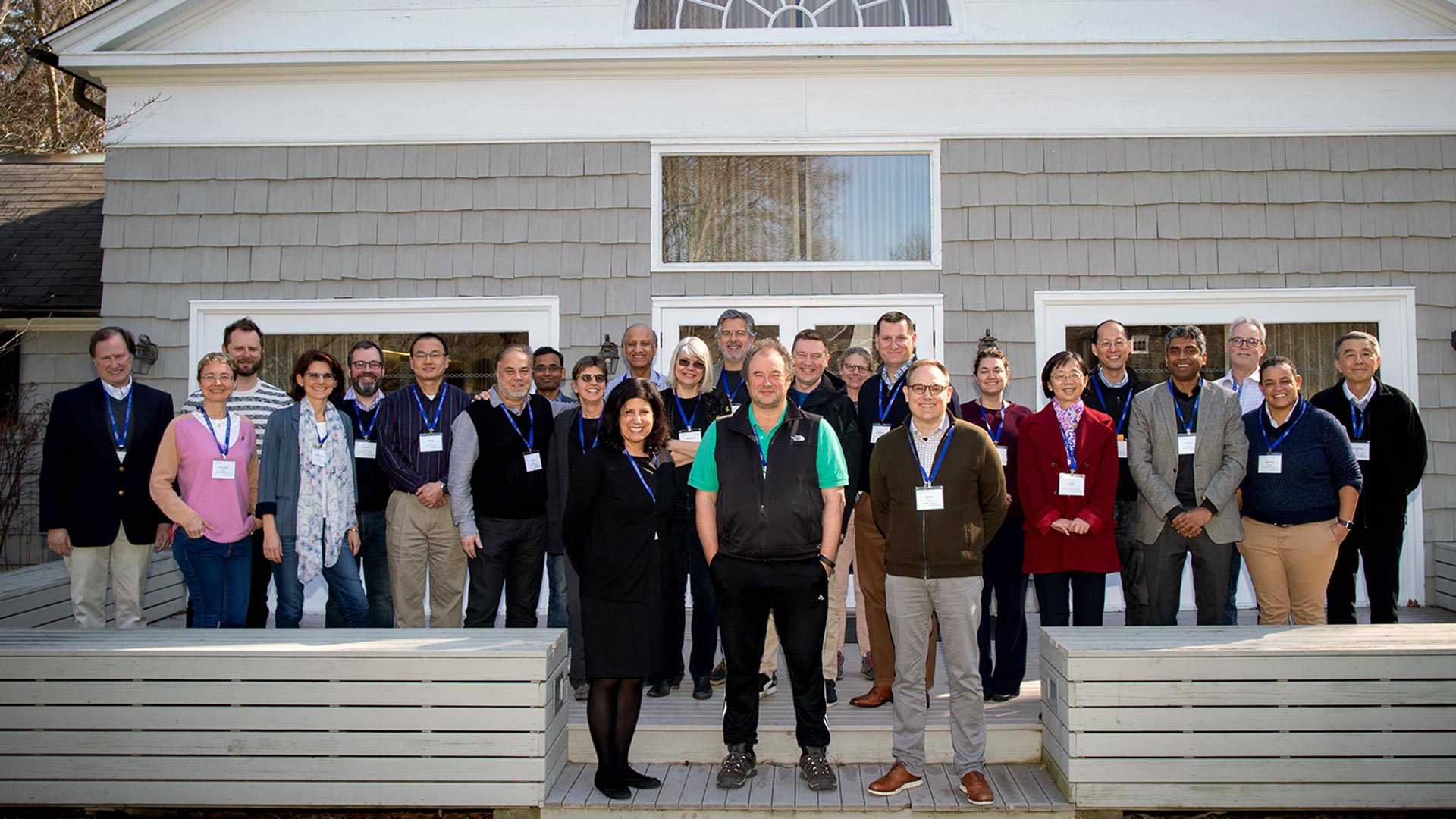 The group photo of the meeting participants of the 2020 Copper Cancer Consortium. In the front row, from left to right, are Dr. Linda Vahdat, Dr. Nick Tonks, and Dr. Mick Petris. Dr. Chris Chang is third from the right in the back row.

Where does a scientific review article begin? How does an idea evolve from a thought to a published paper? Sometimes, a Banbury meeting helps the process along.

Two years ago this week, the Banbury Center convened the Copper Cancer Consortium to discuss the importance of copper in biological functions such as angiogenesis, mitochondrial respiration, and oxidative stress. It was the last in-person meeting Banbury would host before the COVID-19 lockdown in New York. Despite growing uncertainties about the new coronavirus, the group was focused and produced fruitful discussions. Together, they coauthored a review article that was published in the February 2022 issue of Nature Reviews Cancer: “Connecting copper and cancer: From transition metal signalling to metalloplasia.”

The story behind the evolution of that article, from idea to published product, starts decades ago with one of the meeting’s organizers, Dr. Linda Vahdat.

Today, Dr. Vahdat is the newly-appointed Deputy Director of the Cancer Center and Section Chief of Medical Oncology at Dartmouth-Hitchcock Medical Center and Professor of Medicine at Dartmouth. Back in the early 2000s, though, she was directing the Breast Cancer Research Program at Weill Cornell. It was during this time that she first became interested in the relationship between copper and cancer after learning about a phase I study of tetrathiomolybdate (a copper suppressing agent) conducted at the University of Michigan.[1]

“I knew a patient who was on the original phase I study…She went on the copper-depletion trial and [the cancer] never spread; she ended up dying of old age. That made me look at copper as something that might be important to prevent metastasis,” Dr. Vahdat explained in a recent interview. She described a similar mouse-model study, also conducted by the University of Michigan, in which mice in the experimental group did not develop lung metastases until after the copper-reducing treatment was withheld. “That suggested to me that, for some reason, metastasis was waiting to occur, but they couldn’t complete the deal. That made me think of my patients with breast cancer.”

Dr. Vahdat and her team designed a study to test whether copper depletion could “pull out the infrastructure that tumors need to spread.” At the time of the study, the median survival for patients with stage 4 triple-negative breast cancer was 11 months; in Dr. Vahdat’s trial, 70% of patients reached the 4-year mark.

Over on Long Island, the second member of the future Banbury organizing team, Dr. Nick Tonks, was leading research as a Professor at Cold Spring Harbor Laboratory and Deputy Director of the Cancer Center. After reading the published results of Dr. Vahdat’s clinical work, Dr. Tonks reached out to her and asked to meet to discuss copper depletion in cancer treatments.

When asked about how he became interested in the relationship between copper and cells, Dr. Tonks described it as, “one of those interesting stories of serendipity.” Dr. Tonks’ primary research focus is signal transduction. As a postdoctoral fellow in the lab of Nobel laureate Edmond Fischer, Dr. Tonks discovered a family of enzymes known as protein tyrosine phosphatases (PTPs). Since then, his long-time goal has been to produce a PTP-targeting drug for clinical use, despite the pharmaceutical industry largely perceiving PTP active sites as “undruggable.” After discovering that small-molecule allosteric inhibitors can bind to a site remote from the active center, thereby locking Dr. Tonks’s “favorite enzyme, PTP1B,” in an open confirmation, his research into the underlying mechanism revealed that the inhibitors chelate copper.

Together, Drs. Tonks and Vahdat tested the impact of their new copper-chelating molecule in triple-negative breast cancer cells. “We found that this molecule was able to kill those cells potently,” Dr. Tonks recalled.

According to Dr. Vahdat, “We really felt like we were on to something and we really wanted to bring together really smart people from diverse backgrounds in order to help to decide…how we want to develop the field.”

Dr. Vahdat met the third member of the Banbury meeting’s organizing team, Dr. Michael Petris, Professor of Biochemistry at the University of Missouri, at the 2016 International Copper Research Meeting in Sorrento, Italy. According to Dr. Petris, “She [Dr. Vahdat] gave an amazing talk on copper depletion as a therapeutic strategy in breast cancer. I had not met Nick prior the Banbury meeting, but we had corresponded by email, and I was familiar with his work on copper chelation, cancer, and preclinical models of Wilson disease…All credit goes to Linda and Nick for the inspiration behind the Copper Consortium…I jumped at the opportunity to lend my support.”

In 2019, the trio began to work with the Banbury Center on the Copper Cancer Consortium, inviting experts in chemistry, biology, imaging, neuroscience, biomedicine, and hereditary diseases to Banbury’s secluded 55-acre estate. “It was the perfect place to step back from your life, come in to a cocoon, and have really intense, focused sessions about where we want to go next,” said Dr. Vahdat.

Having a broad set of backgrounds present at the meeting was particularly important to the organizers. “You’ve got basic scientists trying to talk to clinicians – for some reason we don’t speak the same language,” Dr. Tonks laughed. “The customs are different in the two communities. We wanted to bridge the gap.”

With only 26 attendees, “I felt that the mood was a combination of professional and relaxed,” described Dr. Petris. “There were certainly moments where you could hear a pin drop, especially when promising new clinical data was presented, but there were also moments of lively discussion among the attendees. Certainly, the small size and the intimate setting made it casual and comfortable.”

Notably, during the meeting, Dr. Ashley Bush of the University of Melbourne first coined the word, “cuproplasia” to describe regulated copper-dependent cell proliferation.

“I think that having a Banbury meeting on this topic is quite prestigious, especially in the science crowd,” Dr. Vahdat mused. “All of a sudden, you take an out-there concept, but then they go, ‘Oh! A Banbury meeting! There must be something to it.’ I feel like it gave a lot of credibility to what we were trying to do.”

In New York, March 2020 marked the beginning of the COVID-19 lockdown. “Actually, one of our colleagues…came from Italy and we were like, ‘Glad you were able to make it!’ because Italy was a mess,” Dr. Vahdat remarked. “Our meeting was March first through the fourth and, literally, the fifth, everything shut down. We literally got in under the wire.”

In light of the lockdown, it became much more challenging to ensure that the meeting produced a quantifiable, meaningful impact on the field. According to Dr. Petris, “It was Chris Chang who initially prompted the idea of a review article centered on the themes covered at the Banbury meeting.” Dr. Christopher Chang, Professor of Chemistry and Molecular and Cell Biology at the University of California, Berkeley, spearheaded the process that eventually produced the February 2022 Nature Reviews Cancer article.

“It’s really great to see a tangible outcome, especially since it was the last meeting for everybody before the pandemic and the world kind of stopped,” Dr. Chang remarked in an interview. “I took the lead mainly for outlining, saying, ‘Oh, we can organize it this way.’ That basically turned into, ‘That sounds good, you should organize it!” he laughed. “Everybody had input in the end, though.”

“After the meeting, Chris managed to keep the group focused on this goal via email. It was an especially difficult time since it coincided with the first peak of COVID-19 in the U.S. and Europe. Working on the article also provided a welcome distraction from the terrible news of the pandemic,” said Dr. Petris.

To Dr. Chang, the article, “provided a unified voice” for the meeting.

Dr. Petris concurred with this sentiment, saying, “It is my hope that the Copper Consortium meeting and the Nature Reviews article will draw scientists, physicians, and commercial interests to this field. I expect that the collaborations generated at the Banbury meeting will lead to the identification of new therapeutic targets in copper homeostasis, as well as opportunities for clinical trials in cancer patients.”

Read the agenda from the 2020 Copper Cancer Consortium at Banbury here.

The 2020 Copper Cancer Consortium at the Banbury Center was funded by the Cold Spring Harbor Laboratory-Northwell Health Affiliation. For more information about the affiliation, click here.